You may recall the last time we were talking about Yamamoto, mentioning the popular talking points about him.

He shares with almost every other young player a label saying that he needs to bulk up. This is said so often about so many prospects that you'd think it was just filler in evaluations now, with a very small slice of prospects in an available draft having mature builds, and with almost every high-end skill player hovering around 170 lbs.

So, when the Oilers drafted Kailer Yamamoto, immediately ready was (almost) everyone's interjection that he didn't have the strength to play against men yet.

This was of course shortly before we knew what one Alex Debrincat was going to do to the league, which was score nearly 30 goals in a season he turned 21, his first in the NHL.

The talking point remains, however, and I doubt it'll go away so long as someone has to say something about these young players with regards to a drawback.

But what does it mean, to not have the strength to compete against men?

Ask this question, and you get the same type of answer as the original statement - a vague platitude.

It's often said that players without 'man strength' can't drive the middle, to important scoring areas. If they're without the puck, they'll be boxed out. If they have it, they'll be run over.

Anyone who read my opening article on this player knows the data doesn't support saying this about him. His heatmaps were red-hot around the net - despite never scoring a goal.

Perhaps that's the difference between nearly scoring and scoring, then? The difference of inches, made by being outmuscled just slightly or having just poorer positioning than what would result in a guaranteed goal.

So then, we have to go to the video. I perused two games, where Kailer appeared to have many on-paper chances, but did not score. Surely these would be the games that showcased this wrinkle in his development.

I've gathered each and every play where he made a drive to the middle, even strength and powerplay, and circled him prior to the play.

Folks, I'm not seeing it.

The first time he got knocked over, that drew a crosschecking penalty. Second time, he was back up in a half-second and it didn't affect the play.

He does get his stick easily lifted at one point, but that's more of a lack of an attempt otherwise than being beaten physically.

Honestly, over half the time he's not even being covered properly, and his sneakiness is a large part of his player identity.

Speaking of which, that was a concern I read a few times. People were watching his highlights from his draft year, concerned about all of the tap-ins and net-front goals, thinking that those wouldn't translate.

It does, and even against high-end players. The defence pair that D's up the 97 line on Carolina, the Slavin unit (usually attached to J. Staal) is one of the most effective I've seen at stifling McDavid. If you're losing Slavin-Pesce in front, there's not a lot of players you can't fool.

Also notable is the amount of minutes he played in these games. Those following the latter stages of the 2017 draft year knew Kailer Yamamoto was an upper-echelon athlete in conditioning, still I've seen here or there that the player wasn't ready for the NHL pace physically. This is the total ice-time of each of his 9 games, in order: 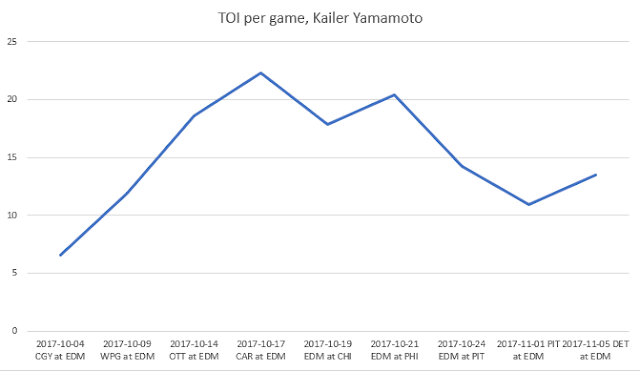 I'm not certain there's a trend to speak of, though there are some peculiarities - for example the sheer difference in playing time minimum and maximum. Breaking camp with a 19 year old rookie, only to play him just six minutes and some the first game, and then later give the same guy over twenty two seems odd. Regardless, I don't think a coach sends a guy out 30 seconds into overtime (in the Chicago game) if he doesn't believe his gas tank has held up.

The time on ice in that Carolina game, by the way? Extremely impressive. The first-overall pick of his same draft class never really came close to that. Nico Hischier once in a game versus Edmonton played twenty-one, that was his highest by far as he hovered around 16 minutes for much of the year, including playing just 10 minutes or less in his first half-dozen games.

I'll lump video of board battles into another installment, with general DZ play, where we address the theory that Kailer Yamamoto wasn't ready defensively.

The idea that the player can't play to the inside due to size or strength, though?

I don't see it, and the data doesn't say it.


Of course the player will be more effective into his middle twenties with more strength, but it doesn't appear to be hard-gating his entry to the NHL. Even a year ago it wasn't.

So in the coming weeks as training camp rolls up, the storylines start and the debate about having Kailer Yamamoto make the team starts to heat up, keep a critical eye open after someone mentions - amongst their argument against - that he needs to put on the pounds. The data and the video doesn't support it.

Posted by keith anthony at 7:00 AM