They took our jobs


The most important part of dividing up responsibility for defensive breakdowns is knowing what each players job is in the system of play. If everyone does their job, from there you can weight each play individually based on which missed execution has the highest and lowest difficulty.


For example, if a 2-on-1 rush against occurs after one defenseman fails a routine pinch under little pressure, then the second defenceman gets the puck passed through him on a one-time play, then both defensemen missed execution but one is a much more understandable mistake than the other. Each player is doing his job (The defenceman has to pinch, a mistake on playing the puck does not make the decision a bad one), but it's much easier to play a flat puck coming straight toweard you then it is to tip an NHL-fast, cross-ice saucer pass.


You only get there if everyone does their job, though. And what is everyone's job?


The two defensive schools in almost every sport are these two, with many variations branching out from each philosophy.


In zone defence, each player has a specific area on the ice that they patrol, at all times staying between the goal and the closest. The general idea is have inside position on general areas, and that no dangerous play can be passed into the slot if each zone is properly defended, as well as the path to skating inside having several layers of checking. Here's a diagram of the basic setup, along with two situations where the puck is in each corner. The defensemen can also simply function as D1 and D2 instead of by handedness, but if the puck is dumped in on an entry this is how they will typically sort out if the puck stays in the zone. The F1 is typically a centre off of a controlled play like a faceoff loss, but whichever forward skates back into the zone first takes those duties down low in a transitional, on-the-fly play because of how critical it is they get there on time. 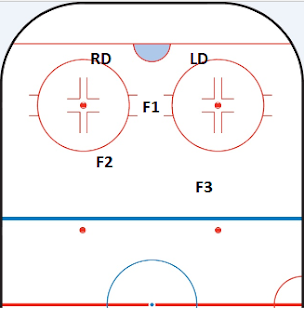 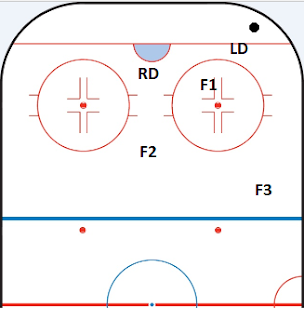 
Man on man defense is even simpler in concept, each player still starts in their general position in the first image or from where they've skated in from their neutral zone positions, but from there simply pairs up with an opposing player and retains a tight gap with them, with or without the puck.


The Oilers made a switch to play the man more aggressively between the 2016-17 season and the 2017-18 season, I'll show you what that looks like.


In this first video from 16-17, note the behaviours of the players I mark, specifically that they stay in front of the net instead of more aggressively attacking the opposing forwards that come near.

The trade-off here is that Klefbom in the second section would have to intercept the pass had it gone to towards Sheary, instead of being close enough to simply tie him up immediately as the puck takes flight towards them. But in return, if Sheary wins that battle the chance is potent and automatic, as the pass is less contested.

Then next, an example of the recent season's style, where I mark the man matchups, wherein players more aggressively close on the attacking forwards, and Ryan Strome comes down to defend the danger area:

As you can see, Draisaitl does some heavy lifting here and that'll be a common theme in this series. These are normal centre/F1 duties except requiring even more discipline and attention. Many of the forwards failed their audition in the system evolution from two years ago, but a lot of the blame ended up going to a defense corps that struggled with more than they can be fairly blamed for. I would not say the switch was a successful one, based on results, though I have time for the theory. The Oilers let in a lot more goals, and a lot more shots from dangerous areas in general as you'll see below. 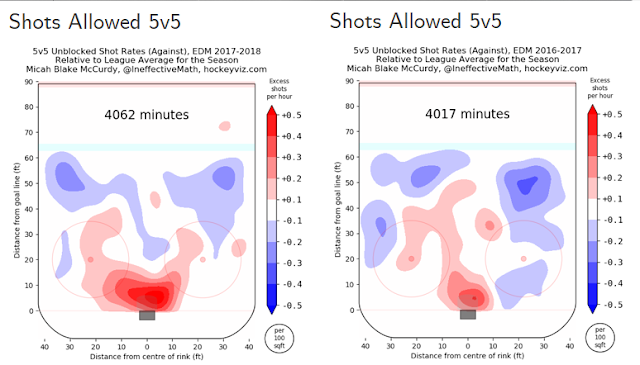 Just like with the micro-plays in hockey, just because someone didn't execute doesn't mean it wasn't a good idea. You can blame Todd McLellan for attempting to implement a system ill-suited for his players, or for not teaching it well enough, you can blame the players for not understanding or for lack of discipline learning it. You can also blame the general manager for the personnel problems. It's all divided up among them though, and what's done's done.


What we do get in return for this miserable season for the good of this research is that again, Leon will have been lifting heavy in these video reviews. I have no doubt he's a more defensively educated player than he was in the season before, teaching himself over and over how to use his body to establish position and win battles. He had to be on guys all the time, that's a lot more total time spent boxing out and battling in the defensive zone than what would have occurred before, playing wing in a less demanding system.


This has been quite the prologue, but the show's starting soon. Next post will be the direct analysis from games in the December area of the schedule.

Posted by keith anthony at 7:53 AM